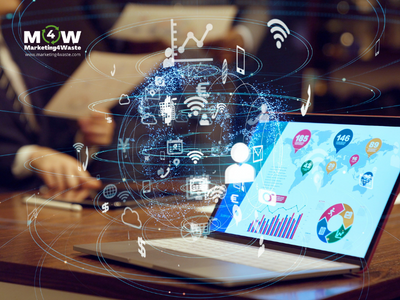 It hurts, I know.

Especially after investing thousands of dollars in new technologies with the promise that they will give you a competitive advantage in your daily challenge with your competitors.

Unfortunately, the person who proposed this solution to you knows little about competition in the waste management market but even less about how to give you a competitive advantage over your competitors.

Unfortunately, this is the truth.

And believe me that the technology with which you manage your waste changes little for your clients, especially if you don’t leverage it in your agreements, which in most cases you don’t.

Yet it’s full of consultants proposing that you use artificial intelligence to recognize the waste coming into the plant, that you put RFID code to keep track of the waste bins, that you use a new management system that monitors how many steps your employees take as they pick up the waste and a hundred thousand other pieces of crap.

Yes because we are talking about bullshit.

But the most absurd thing is that they pitch them to you as if they were the solutions that could change the fortunes of your business, encourage separate waste collection, save I don’t know how many thousands of tons of CO2, and so on.

Believe me, I wish it were all true more than you want it to be.

Unfortunately, it is not.

In fact, the competitive advantage they mention is the same one they sold to the other 10,000 companies in the industry, and all it did was give their company’s pockets an advantage.

The competitive advantage that they mention to you is hot air.

And let me add that they, first of all, misuse the definition of competitive advantage.

Yes because they really don’t even know what it is.

That’s why it’s important that you point out what a competitive advantage is, and to do that let me refer to a great investment figure and a great brand that has been standing for over 120 years.

The first is Warren Buffett, the well-known oracle of OMAKA, who through his investment prowess built one of the world’s largest investment companies (Berkshire Hathaway).

The other is none other than Coca-Cola. Yes, a well-known brand of the most consumed beverage in the world.

I know you are asking yourself, “What does Competitive Advantage have to do with THEM?”

Well, you should know that Warren Buffett in his investment dynamics, which led him to grow and prosper to his 276 Billions Dollars of Capital, always took into account a unique aspect that distinguished companies in the industry.

The advantage for Coca-Cola corresponds to the famous secret formula that has characterized the drink for over 135 years.

Not some technological apparatus that already today that you bought has become old.

Competitive advantage comes from having something that makes your business, your product, and/or your service unique.

That is a competitive advantage.

And, let me add, that Mr. Buffett has only ever invested in companies with a lasting competitive advantage.

That is something that, as in the case of Coca-Cola or KFC, does not change from today to tomorrow but not even years later.

How do you define a real competitive advantage that makes your waste company unassailable by your competitors?

Well as I told you competitive advantage is something that is unmatched by your competitors. Always think of the secret formula of Coca-Cola or the secret recipe of Colonel Sanders of KFC.

In both cases, their recipes have an ingredient and formulation that has never been revealed.

I’m well aware that you don’t have a recipe but you can work on building or defining a service that acts as a competitive advantage.

For example, it could be “We pick up your smelly waste within an hour of your call or it’s free.”

Or even “Never again with a house full of garbage, thanks to our exclusive service that picks up your waste 4 times a day.”

These are two simple examples but it is by going in this direction that builds a true competitive advantage that will make your company unassailable by your competitors.

I know it is not simple but, as I always say, if it were simple everyone would do it.

In fact, in the case of the famous technology that offered you a competitive advantage over your competitors, that’s exactly what it was: it was so simple that everyone implemented it and goodbye advantage.

As always, the easy path is the one traveled by most and does not produce an advantage.

If you want to build your competitive advantage schedule a consultation by clicking here and I would be happy to guide you along the way.

Discover how we can help you with your marketing strategy.

We can request cookies that are set on your device. We use cookies to let us know when you visit our websites, how you interact with us, to improve your user experience and to customize your relationship with our website.

Click the different category headings to find out more. You can also change some of your settings. Note that blocking some types of cookies may affect your experience on our websites and the services we can offer.

These cookies are absolutely necessary in order to provide you with the services available through our website and to use some of their functions.

We fully respect if you choose to refuse cookies, but to avoid you always are asked again, please allow us to save a cookie for this. You are free to opt out at any time or opt for other cookies for a better experience. If you reject cookies, we will remove all cookies set in our domain.

We will provide you with a list of the cookies stored on your computer in our domain so that you can check what we have saved. For security reasons, it is not possible for us to display or change cookies from other domains. You can check this in the security settings of your browser.

These cookies collect information that is either used in aggregate form to help us understand how our website is used or how effective our marketing campaigns are, or to help us customize our website and application for you To improve your experience.

If you do not want us to track your visit to our website, you can deactivate the tracking in your browser here:

We also use various external services such as Google Web Fonts, Google Maps and external video providers. Since these providers can collect personal data such as your IP address, we allow you to block them here. Please note that this can severely limit the functionality and appearance of our website. Changes will take effect as soon as you reload the page.